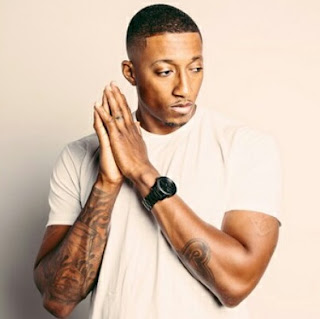 This song by Lecrae is the hottest song out besides all the songs on Rick Ross's new album. I'm pretty new to this artist (Lecrae) so hopefully he can produce more songs like this one; "Blessings." This track features Ty Dolla $ign, who seems to be the new feature king right now.
Check out the video below.
"GET THE WORD OUT!"

IG/Twitter: weirdo_leek & IgnoranThinker
Posted by Unknown at 11:39 AM No comments: 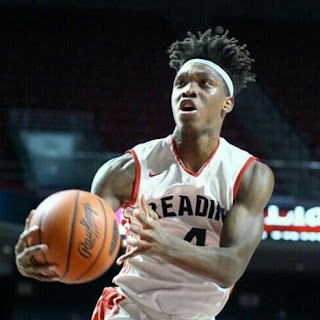 Initially (thanks H&D (insider(lol), I had my day planned to finally get my first glimpse of Quade Green of Neumann-Goretti play basketball. Green is nationally ranked and heading to play basketball next year at college basketball heaven, the  University of Kentucky. He is also the  22nd overall basketball player in the nation, according to "ESPN," a very credibal source.
While I'm purchasing my ticket at Temple Universities Liacouras Center. I was notified that I wasn't just purchasing for one game but two. Buy one get one free? I'm a coupon addict I live for these type of deals. So I would be watching Quade Green and Neumann-Goretti versus Delaware Valley Charter and also Reading High School versus Archbishop Ryan. So, before the game I don't know no players on either of the teams of the second game, but let's just say I'm glad I stayed.
Neumann ended up blowing out Del-Val 76-47. In a pretty modest attendance, which I was surprised and embarrassed by since both of these teams are from the area.
Up next comes the game of the night;  Reading versus Ryan. Patiently waiting for the clock to tick down to start the game so I can race home so my girl don't think I'm out cheating because a second game wasn't in the books (lol). As I'm waiting I wipe my eyes to see if I'm not seeing things. I start to notice the arena getting crowded. Just then a guy sitting a seat down from me, he pats me and sarcastically asked me: "now you ready to see a game?" Now I'm in the sunken place (lol), the whole time I figured I was in the Neumann section, I wasn't because their wasn't a Neumann section. I was clamoured around an arena full of Reading supporters (shout out to them, they really ride for their squad and their city), a small percentage was for Neumann and Ryan. So me thinking he gassing (Philly term) the situation, I nod sarcastically and say yeah. So in response he says to me, "watch out for him." Pointing at a slim but muscular, tall teenager, with a red headband and sporting the new culture look of a nappy top or nappy mini afro. This teenager happened to be Lonnie Walker, number one ranked player in the state of Pennsylvania and number 18th overall ranked player in the country according to ESPN.
The game starts! Jump ball, immediately the vibe in the arena is totally different from the first game. Fans are shouting from the beginning to ending of the game. I got three old ladies behind me yelling all game. They reminded me of the Golden girls how funny they were but at the same time I was amazed to see how well they knew the game. Me being a new referee, it was a tough atmosphere to deal with and an atmosphere I'm not ready for.
First quarter every thing going Ryan's way. I'mm happy but at the same time I have to be discreet, remembering I am on the opponents section. Second quarter comes that's when all hell (excuse my language) breaks loose. The teenager that I was told to keep an eye on, well he went off. Helping Reading end the quarter on a big run eventually taking the lead. Reading will never give up the lead after that and the kid, Lonnie Walker was just as good as advertised, ending the night with 35 points and a trip to the state finals.
It was a good night for me to watch some good high school ball, watch some future college stars, learn from the referees I was watching and to enjoy a good night with some Reading, Pennsylvania folks. 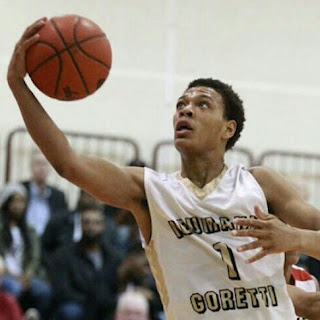 IG/Twitter: weirdo_leek & IgnoranThinker
Posted by Unknown at 7:37 AM No comments: 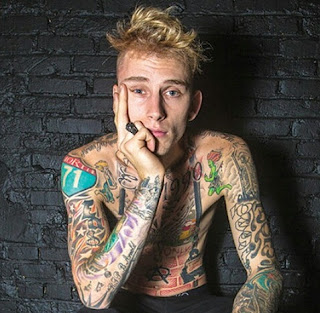 This guy been missing for a while. Last time I seen him, he was snapping on a girl on a episode of "Catfish (hit show on MTV television network)." Well I'm glad he's back, and he's back with a banger! Machine Gun Kelly releases a new track called "At My Best" featuring a newcomer to me, she goes by the name of Hailee Steinfeld (she has a beautiful voice).

IG/Twitter: weirdo_leek & IgnoranThinker
Posted by Unknown at 12:09 AM No comments: 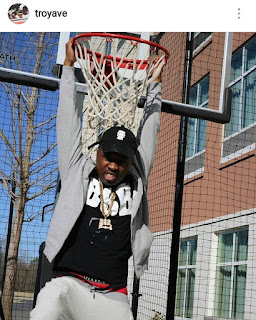 Seems to me these blog and hip-hop websites tryna black ball my dude Troy Ave. Troy dropped a hot track entitled "Real Eyes Realize Real Lies," three days ago and still haven't been posted on some of these so called top hip-hop sites. I wanna know what's going on. It's cool though Troy, we got you.
Check the video out below.

IG/Twitter: weirdo_leek & IgnoranThinker
Posted by Unknown at 9:10 AM No comments:

Just when Remy Ma said the beef was over, Nicki Minaj decides to finally come back. Nicki Minaj releases three tracks, one coming at Meek Mill in a way, one taking shots at Remy Ma and one track strictly for Remy Ma, but it features Drake and Lil Wayne. That's a no-no, because if they didn't forget, Remy Ma is married to a lyrical monster which he proves yet again on this diss track called "Culture Vultures" in response to Nicki Minaj's diss track.  Check it out by clicking the link below. Hey we in a real beef now man, I'm excited.

Posted by Unknown at 9:00 AM No comments:

"NICKI MINAJ FRESH OFF THE PRESS!!!!" 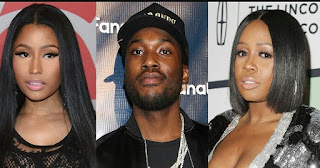 First off let's get this clear. I'm a Nicki Minaj fan always has been and always will be. But, it's like this, for instance, we all got a punk friend or whatever. Somebody picks or keeps picking on your friend and you desperately wants him to stand up and fight for himself but deep down you know he not cause he a punk. So you be so mad at him for it but you still his friend but you don't wanna be bothered with him at the time so you give him his space. That's how I felt about Nicki, like you got to come back no matter what people try to say Remy Ma's diss TRACKS were both hot and entirely disrespectful so I'm like yo Nicki you got to come back. I'm a Nicki fan before I support Remy so I was getting heated. But today we can all be friends again, the Queen of the game, the baddest chick (this is no debate, Nicki badder than Remy) in the game finally responded. After listening my review is Young Money is all the same. They don't write the greatest bars but they write greater music. Just like the Drake "Back 2 Back" diss track, their is not no great bars on that track it's just a great song to listen to. But, niggas ride Drake nuts more than his skin so niggas going to hype it up. Remy made a great diss track with bars but Nicki's diss track I would rather listen to. By the way if I didn't mention Nicki dropped three songs and one she is talking about Meek Mill not in the baddest or the nicest way but she is clearing her thoughts, that's a hot track also.
Check out all three tracks entitled "Regret In Your Tears," Changed It," and "No Frauds" below. Also check out a click of Lady Luck, Remy Ma's long-time nemesis to see how she feels about Remy Ma towards Nicki. She makes a lot of good points. That clip is going to be below also.

IG/Twitter: weirdo_leek & IgnoranThinker
Posted by Unknown at 3:29 AM No comments: 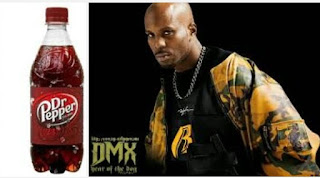 Late last year or early last year I believe, I got the dates mixed up. But, the Philadelphia school system is in a major downturn. I know this first hand from being a student in the system, having younger siblings and nieces and nephews in the system and also because I'm a referee. I go to see schools and gyms and see students having to have gym or basketball games in the same rooms that they eat their lunch in; that's terrible and saddening.  So to fix this issue, with schools having little funding, teachers having no desire or excitement at their jobs based on the new news currently of a teacher posting a billboard discussing teachers not getting a raise in five years. So again to fix this solution, Philadelphia mayor Jim Kenney and the Kenney administration decided to put a tax on our favorite beverages. Basically it's like a bait or blackmail, either you be more healthy or pay to indulge in the negative nullrishment. Again I'm a victim of this new tax myself.  For example, I'm a new coupon fein, so I have this coupon for "Family Dollar" which is three cases of soda for ten dollars. I was excited, I got me a great deal is what I'm thinking. Naw, shoot my excitement down ASAP (as soon as possible). The cashier tells me because of the recent soda tax they can't redeem this coupon I can only use it outside of Philadelphia county. Of course I'm upset, but I can't be mad at the cashier she don't make the rules she just has to do her job; I ended up paying $17 instead of the ten dollars I expected.
How has this soda tax affected other areas of the city? Well rumor has it a lot of  people are shopping outside of the county and I don't blame them. Who this has effected the most is soda companies. Has it? Well based on my findings via the internet and the "Philadelphia Daily News," local soda companies, such as Pepsi and Coca-Cola are laying off a good amount of employees. Here is where it gets debatable. I'm going to use Pepsi as my example. Pepsi has stated last week that they are scheduled to lay off 80-100 workers based on a "supposedly" 40 percent cut in sales, but in other stats it shows that Pepsi made $35 billion last year and a $6 billion dollar profit. This soda tax has also helped create 251 jobs specifically full time Pre-K teaching positions. So is the soda companies really losing money? And on the other hand would you trade in one hundred loss soda workers for an additional 250  educational workers? It's a dog eat dog world and something has to give so? Your thoughts. But! On the other hand, it has been reported in pass news that the city of Philadelphia is also receiving thousands, I mean high thousands from Uber and other ride sharing companies that also help benefit the Philadelphia school systems. So is these soda companies being greedy or is the Philadelphia school system doing that bad that they need funding from two different funding companies?

IG/Twitter: weirdo_leek & IgnoranThinker
Posted by Unknown at 11:37 AM No comments: